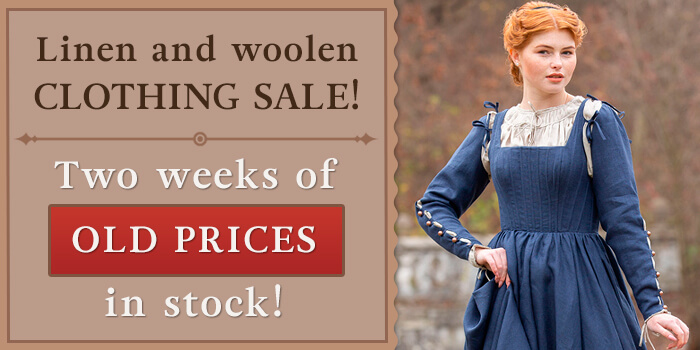 Use of the flax linen in Medieval clothing

As we, at ArmStreet, are making a lot of our garments from linen, it is probably the time to explain why it is always our first choice for a lot of purposes – and why we are actually love it so much.

First of all, linen – or, to be more specific, flax linen – is one of the few materials which was actually used during Medieval time to make clothes. While silk was known for ages, only the unsteady and limited import from China through the famous Silk Road was the source of it for Europe – making its price only slightly shy of the Lunar soil in today's equivalent. Roman Emperors could afford silk toga – as well as Byzantine Emperor could enjoy silk robes – but they where among state treasures and not among everyday clothes. Only from the time of Crusades import of silk became somewhat more available (still as the sign of status for the highest ranks of nobility and clergy). The cotton was known to the Europe and Asia Minor since Alexander the Great but its only source outside of India (where it was domesticated and the technology invented) until Industrial Revolution was Iran and Central Asia – and for the obvious reasons trading with this region was somewhat impeded for several hundreds years. Therefore, maker of medieval dresses set (especially we are talking about more or less casual Medieval  outwear) with the choice between two materials: the flax linen and wool, – which remained the most used types of fabric until the Industrial Revolution. 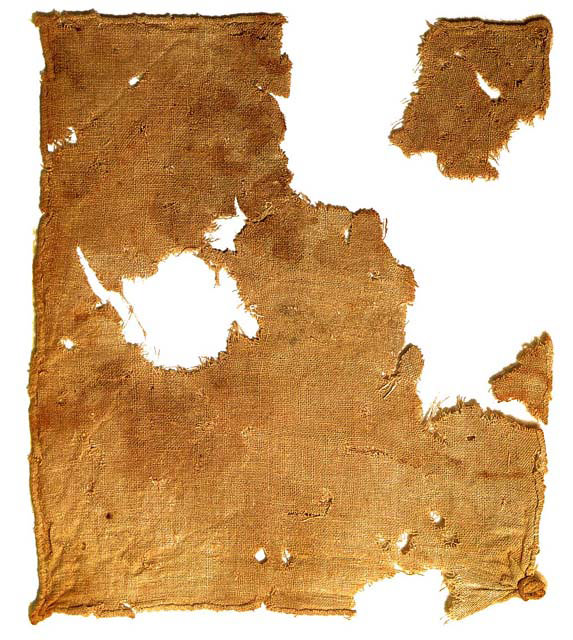 So deep the linen was ingrained into the culture and everyday life of Medieval Europe, that, if we look at the English language itself, we'll see how much the flax linen get woven into the linguistic fabric as well: words “line”, “lining”, “lingerie”, “linseed oil”, “linoleum” etc, – all deriving from Latin name of the flax – “linum”.

Mechanical property of linen – its flexibility along the weft of the cloth together with relative rigidity along the warps – have created familiar silhouette of the medieval dress: with its elongated forms and elegant folds. 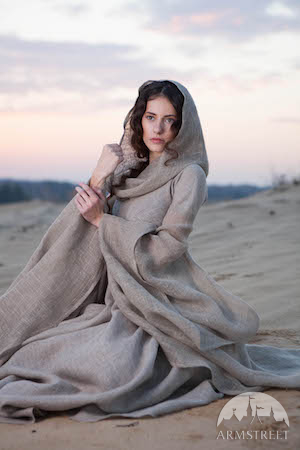 Robe made of natural linen

Looking back to the humanity history even deeper, flax linen is one of the oldest types of woven fabric known to mankind. Archaeological evidences pointing to the Georgia (the country) (as early as 30,000 B.C.) as the oldest place known using the flax linen fabric. At 3000 BC Mesopotamians already mastered full domestication of flax and mass production of linen – as a fabric used by the wealthiest classes of the society to demonstrate their high status. Egyptians started to use linen to wrap the mummies – to insure sacred purity and highest respect for the dead – around the same time.

From that point linen spread throughout the whole Mediterranean and Europe – and became one of the most ubiquitous materials: from lightest and thinnest brands from the ceremonial garments of priests and nobility, – to heaviest canvases layered for in the armor of Spartan hoplites, from feather-light decorative cords of Dutch and Brabant crochery – to the rigging ropes. During thousandths of years flax linen was, to say, strategic material – as much as oil and steel today.

Linen's unmatched flexibility, its capability to protect from the cold – as well, as shield from the heat – insured its use for the last five millennials. Even after introduction of silk and cotton to Europe, it was still most common material – flax is able to grow almost everywhere in the Old World, barring perhaps only North of Scandinavia and Saharan desert. Its relatively inexpensive and could be used almost entirely: stem produce fiber and seeds gives oil. When paper making was introduced to Europe it just happened that for centuries the best paper was made not from cotton but linen fibers! 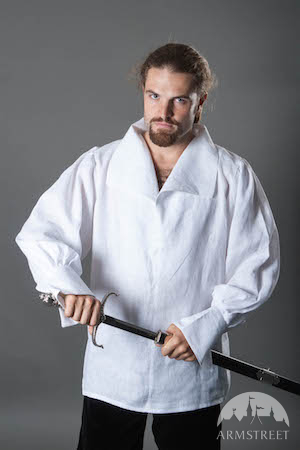 And as a material to work it deserves our special recognition: it is flexible, it is easily taking all kind of pigments used during medieval time, so one can produce bright colored fabric (and even without ANY pigments flax linen have its own appealing look and texture). It is strong and wear resistant. It has unmatched thermal insulation capabilities. And, last but not least, – it is the most ecology-friendly sources for the industrial fabric! 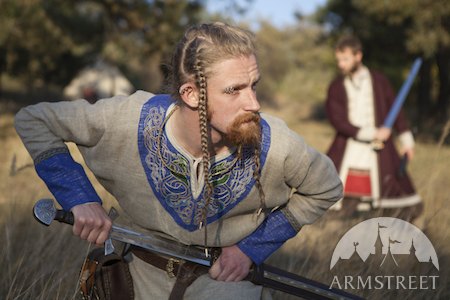 So if you'd look one day on the picture of the Roman legionary, Scandinavian viking, French crusader or Italian noble woman, – one thing common for all of them is that their garment was probably made from linen! 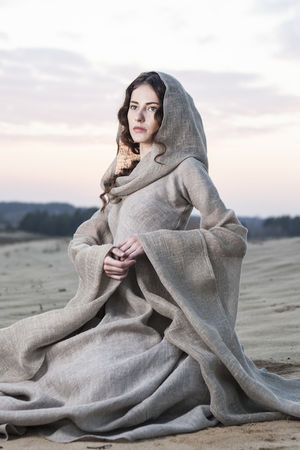 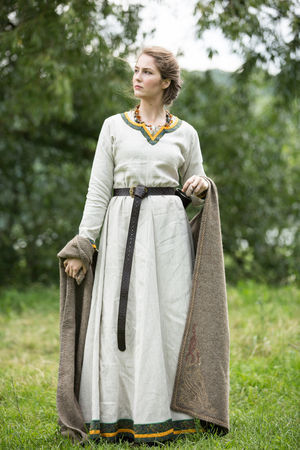 “Ingrid the Hearthkeeper” Dress for Sale 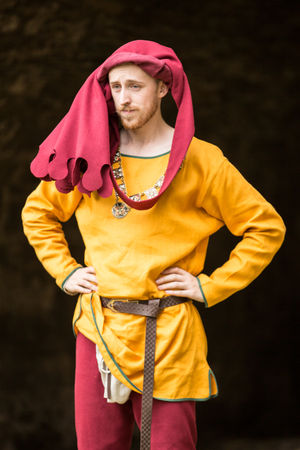 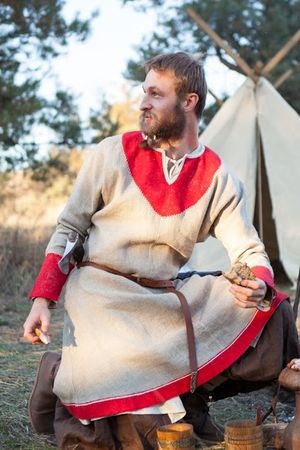 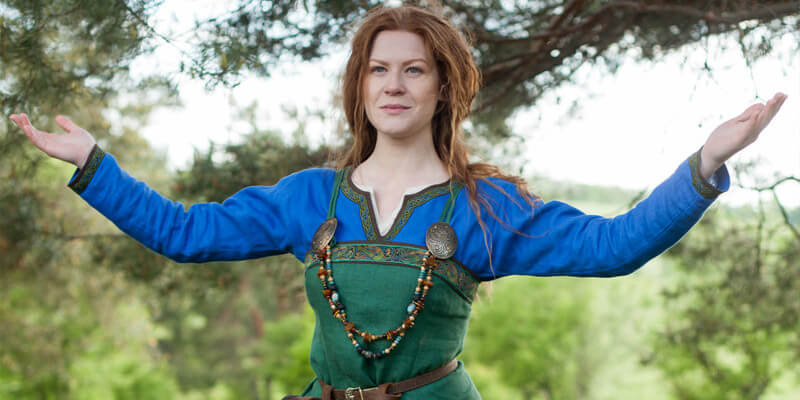 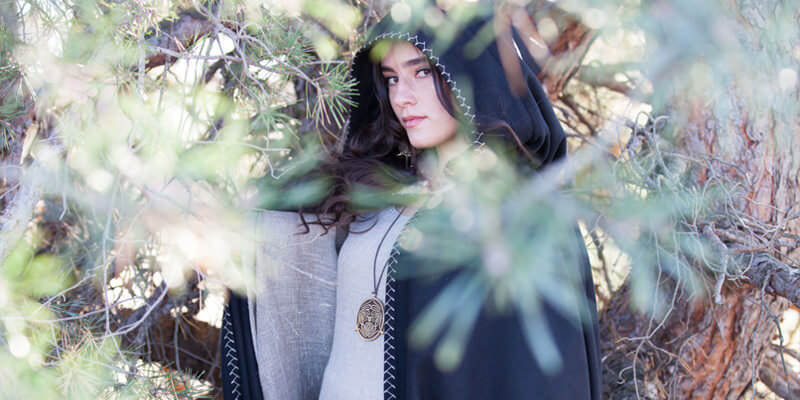 Mystical “Labyrinth” Collection — do you believe in magic?

They say that Labyrinth contains force to command fate. From the spiritual to the artistic, this attire helps to put us in the right frame of mind for rituals and practicing witchcraft. 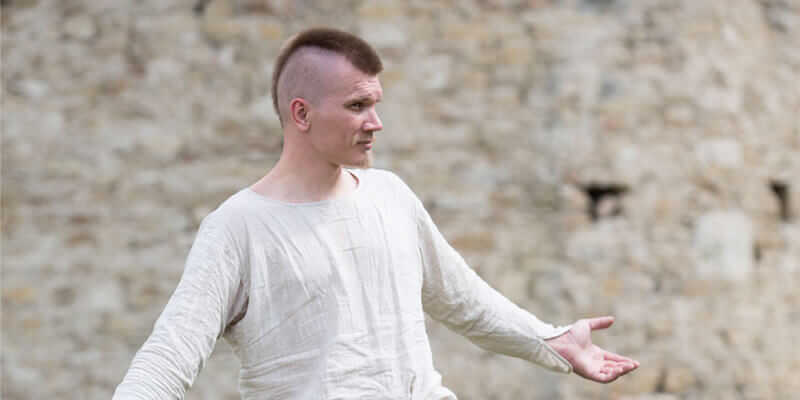 Your character should be perfect from head to toe. Enjoy our new medieval underwear collection!